Ankeny, IA – September 13, 2022 – PowerPollen today announced the first in-season pollination solution available for corn production, In-Season Control™, described in a recent publication in Crop Science (link here).  “Bringing our pollination technology to farmers has always been the goal because of the massive implications for generating value and overall sustainability. We have now validated a technology for growers to enhance their crop outcomes right up until pollination, thereby reducing risks and maximizing value per acre,” said Dr. Todd Krone, founder and CEO of PowerPollen.

Built upon the same pollination technology platform licensed by Corteva and Bayer to improve seed production, this technology is expected to be commercially available for grain producers by 2026.

Grain farmers traditionally purchase hybrid seed and crop inputs well in advance of the next growing season. Once the seed are planted and inputs deployed, the yield potential for the season is set.  The return on a grower’s investment is determined largely by the previous year’s decisions, the weather, and the current year market prices leaving little control of ROI in the hands of the farmer.   In-Season Control™ changes that.

Growers Manage Genetics During Pollination to Increase Value per Acre

“There are many ways to improve productivity, but none puts more optionality in growers’ hands than enabling control of pollination,” Krone said. “For the first time, farmers can select output traits that are needed to meet current market demand while in season – rather than relying on decisions locked in during the previous winter.”

In 2021, PowerPollen’s In-Season Control™ on-farm trials using high-oil pollen resulted in up to $200 per acre of additional value by enabling:

Jeff Taylor, a farmer and chairman of Lincolnway Energy, said “The notable increase in oil and number of kernels show PowerPollen’s ability to deliver unique traits through pollination, thereby turning a standard hybrid into a top oil-yielding hybrid without hindrance to overall yield.  PowerPollen’s ability to increase oil production by 1.0 pound per bushel is a significant step-change in the value of ethanol production to our growers, and I am excited to become more involved with commercial testing of this technology.” 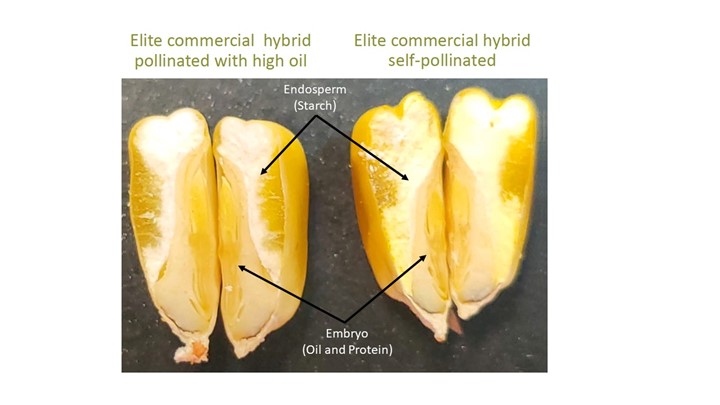 Other valuable traits can be delivered the same way, and pre-selected for market potential. PowerPollen and John Deere recently co-authored an article in Crop Science (link here)  describing how timely In-Season Control™ pollinations can increase grain yields and market value.

PowerPollen offers a breakthrough, scalable technology to collect, preserve and apply pollen on-demand to help improve the productivity, profitability, and sustainability of modern farming practices. Following multiple seasons of year-round field trials, PowerPollen’s patented pollination technology increased yield by more than 20% in commercial hybrid corn seed production fields. The company has successfully applied its technology across thousands of commercial acres over the past several years. PowerPollen is headquartered in Iowa with additional research operations in Puerto Rico and numerous mainland US states.